How do you kill a zombie statistic? 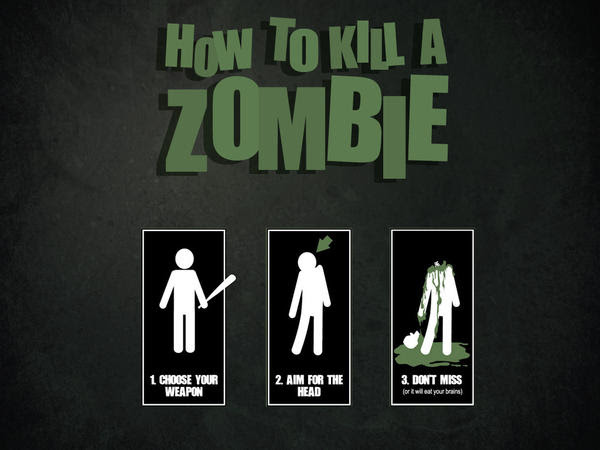 Zombies, eh. They're all the rage. But there does at least seem to be pretty widespread consensus on how to kill them. Don't aim for the heart, you fool! As anyone who has played first person shooters knows, it's all about head shots.

Sadly, zombie statistics also seem to be all the rage. And I have absolutely no idea how to go about killing them. Oh, and if anyone thinks that zombie statistics aren't dangerous, think again! They'll eat your brain if you let them. And often, you won't even realise that they're doing it.

It's either a testament to my tedium or their resilience that I am going to write a fourth (count them - one, two, three and now number four!) blog post that includes the line "5,000 lives a year from cancer".

To borrow the terminology of the day, courtesy of The Walking Dead (you know, the one with the man-child Egg from This Life playing the husband of the wooden Dr Sara Tancredi from Prison Break), the cancer deaths 'walker' is still very much with us.

But first, a bit of wider context. Just this morning, BBC news tweeted the below:

First of all, I'm delighted to see the word 'changes' being used, rather than the usual 'reforms' or 'overhaul'. Orwellian language, innit. You reform or overhaul something because it's either plain bad or you're patently making it better. We are years away from knowing whether these changes will make anything better (and that's if we will ever know... don't laugh, it certainly wouldn't be the first time that the NHS train set had been played with by the Fat Controller of the day without any way of knowing whether it made things better or worse). For now they are just changes. Secondly, four out of five people - wow, that's a lot. The Government seem to be in a bit of a pickle, but is it fair to say that the Government hasn't done enough explaining?

Well, let's see. Yesterday we had the rapidly convened 'summit' meeting of... er, well, anyone who hasn't rocked the boat thus far really. Here is a relevant, ahem, infographic / data visualisation. And just to be crystal clear, this is definitely not what happened during the hour long meeting at Number 10. However, this did happen to the Secretary of State for Health on his way to the meeting.

Not only are they listening, they've also produced fact sheets to help explain. Sheets... full of facts! Facts are good. Facts will reassure us. We love facts! Go to work on a fact. Get on your fact. We want facts, and we won't wait. In facts we trust. Keep facts and carry on.

Any Bill that requires 19 separate fact sheets has to probably have some sort of question mark hanging over it, but let's gloss over that for the moment.

Bring on the lovely facts on those lovely sheets!

First up - Factsheet 1. Nice one, just the one page. Maybe I am being unfair having a little moan about there being 19 of them. Short and no doubt sweet. Well, short anyway. On this first sheet of facts, there are in fact only two discernible 'facts' (quotes required, trust me).

The first 'fact' is that the cost of medicines is growing by over £600m per year (for information, over here are 10 facts on the cost of medicines, giving some very interesting comparisons and context). To date, and despite the lack of a primary source to check the figure against, I've just kind of accepted it when I've heard it in a kinda yeah, sounds about right, bound to be getting more expensive, grrr big pharma type way. But actually, I have no idea if it is right. SOURCE PLEASE! And I don't mean ketchup (although I do love ketchup). And this seems to cast a bit of doubt on it straight away. So is it the 'cost of medicines' or the 'cost of advances in treatments and medicines' that is growing by 'over £600m per year' or 'around £600m... every year'? COUGH UP THE SOURCE AND WE'LL CHECK IT!

The second 'fact' is our infamous walker. Somebody please aim for the head and take it down once and for all. Here are the immortal words: 'If we had cancer survival rates at the average in in Europe, we would save 5,000 lives a year'. I really don't need to say any more. This post is littered with links thoroughly debunking that claim. And the debunking started about a year ago!! And the problem now is that, faced with a Government that is happy to keep peddling a 'fact' that was outed as dodgy as Free Piece Sweet, I simply don't trust the other 'facts' that are being used in relation to the Health and Social Care Bill. Unfair? I don't think so. They've been Goldacre'd. They must know they've been Goldacre'd. And yet, they keep peddling and carry on. What they should do is apologise, of course. But that's about as unlikely as a politician answering a straight question with a yes or no answer. Failing an apology, they should at the very least stop peddling it. But they haven't. They have therefore lost my trust, and I am now skeptical of their other 'facts'.

Sooo, to sum up Factsheet 1. Until a source is supplied regarding the year on year increase in the cost of medicines, it does not contain any actual facts. That is a pretty special achievement for a fact sheet. Take a bow, Factsheet 1.

Skimming through what I have written so far, I realise that if I go through all 19 fact sheets, this post is going to get longer than either I want to write or you want to read. So let's stop at two.

Second up, and finally (for the time being at least) - Factsheet 2. This is entitled 'The case for change', so big, important stuff must be on it. It's another one pager - absolutely nothing wrong with brevity (note to self). And it opens up with a quote from Paul Corrigan.

Read it for yourself and make your own mind up, but to me it's a bit of an odd, obscure quote to choose. Don't get me wrong, Paul's often very quotable, and I often quote him, but it's just that this particular quote isn't the kind of punchy, hit you between the eyes, this is why we need this Health and Social Care Bill in a nutshell quote that you'd think the Government would be looking for. And don't forget, they could have chosen any quote from anyone over the last year and a half. Paul also happens to write a very interesting, very good, very regular (note to self) blog. I would strongly encourage you to read some of his posts, because he isn't always... how can I put this... hmmmm, the case for change for this particular Health and Social Care Bill personified. Paul is now aware that he has been quoted on the second sheet of facts, and will be responding on his blog tomorrow (Wednesday 22 February). I have absolutely no inkling what he might say (he might be both delighted and flattered), but I shall certainly be reading his response!

So on to the 'facts' on Factsheet 2. Well, we've got the cost of medicines. Again. Let's move on. Actually, hold on, more doubt cast! Factsheet 2 doesn't even agree with Factsheet 1. Engage pedantry, level 3.

Small beer? Yeah, probably. But I'm not filled with confidence in a suite of fact sheets that aren't even consistent between themselves.

The next 'fact' we have is another one that I've never thought to query before now. On the same basis again, that it sounds plausible, but I'm in full on skeptic mode now. Obesity costs the NHS £4bn per year, and will cost £6.3bn per year within the next four years. SOURCE PLEASE! Seriously, it is so, so, so, so easy to include the source. Just a little superscript number, and a list at the bottom of the page. Here's an article about obesity, which talks about £1.9-£2bn per year medical costs being added by 2030, and £5.5bn being added by 2050. But certainly no reference to £2.3bn being added by 2015/16. Here's the Department of Health quoting the £4.2bn per year figure, but again, no mention of it being £6.3bn within four years. Also, please do note the Department describing the £4.2bn figure as an estimate! COUGH UP THE SOURCE AND WE'LL CHECK IT!

The final 'fact' I'll look at is from a 2011 Royal College of Surgeons report. Of course, Factsheet 2 doesn't include a link to the source, but I will. It's here. It's a very interesting report with some very practical recommendations, but seriously, I can find no concrete reference for the 'thousands of lives could be saved if  patients had better access to facilities such as x-rays, scanners and operating rooms, and better post-operative care'. If I've missed it, apologies. And I would be delighted if someone could enlighten me. But I want a specific reference to thousands of lives being saved, remember.

Right, so as per usual, this post is both longer and less focused than it should be. The title suggests that it should be just about the cancer deaths myth being wielded out again (somewhat deliciously, our PM just yesterday said it's time to do some myth busting - lock and load, C-man. Aim for the head! Take that walker down), but I've wandered off, around and all over the shop.

My excuse - there's a lot going on with the Health and Social Care Bill right now. And a lot of what's going on ain't good. All I ask as a starting point is to play fair and straight with facts and figures. Some NHS statistics are very complex and can be employed by both sides in an argument - waiting lists are a classic example. See here. But making up 'facts' to justify huge changes to the NHS is just not on.

I would end by saying, now where's my double barrelled shotgun, but that might get me into Robin Hood airport type trouble.

Doogie
Sports mad 30 something Brit, living and working in London, with an embryonic plan to up sticks and relocate to Sydney with my beautiful wife and baby boy.